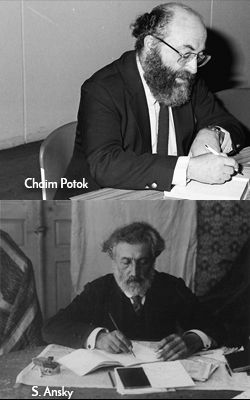 “Out of the Depths” came to be when noted director John Hirsch asked Chaim to speak to his students at Yale about Ansky’s “The Dybbuk.” He spoke for two hours on a cold morning in 1988, about how a secular literary man like Ansky, an intellectual and a revolutionary, became interested in and was inspired by the preservation of vanishing Jewish folklore.

In Jewish folklore, Ansky found, according to Director David Bassuk, “joy, friendship, and a connection to people that had eluded him all his life.” The tale of the dybbuk, and the play he crafted from the legend, “became a meditation revealing profound themes of Jewish life, emotional separation, and physical longing.”

These themes equally resonate in Chaim’s depiction of Ansky himself, as Chaim was deeply interested in the interconnectedness of Ansky’s religious upbringing and his chosen secular lifestyle. To Chaim, this clash of cultures, both familiar and foreign, are defined in what his daughter, Rena Potok, calls one of his major teachings: “that there is no such thing as a single, absolute truth.”

Chaim had been a U.S. chaplain in the Army, stationed in South Korea from 1955 to 1957. There, he encountered next to no Jews, and no antisemitism, but was transformed by his encounters witnessing other religious believers who matched in fervor and devotion the Orthodoxy he’d grown up with, in an Orthodox Jewish home in New York. In Chaim’s view, according to Rena, “multiple truths” exists, and that “cultural identity and experience are malleable and mutually informing: the more open we are to confronting, or fusing with another culture, the more we grow as individuals, artists, and intellectuals.”

In “Out of the Depths,” S. Ansky must confront his Jewish history, and the stories of his ancestors he’d once scorned, in order to create a beautiful piece of art, “The Dybbuk.” In doing so, he was able to fuse the religious and the secular, in order, as written by Chaim, to return to Judaism “on [his] own terms.”

The New York premiere of a staged reading of “Out of the Depths” will be performed at the Center for Jewish History on February 3. Directed by David Bassuk and introduced by Rena Potok, the performance celebrates the publication of The Collected Plays of Chaim Potok, edited by Rena Potok. A book signing follows the program.

Join @centerforjewishhistory and @jdforward on Feb 3 for the NYC Premiere Staged Reading of “Out of the Depths” by acclaimed writer Chaim Potok. Set against the backdrop of war and revolution, this beautiful play tells the story of S. Ansky, legendary Jewish author and playwright, as he grappled with defining his own sense of identity while writing one of his most famous works, “The Dybbuk.” Directed by David Bassuk, with an introduction by Rena Potok. Tickets on sale at potok.bpt.me!

The Records of HIAS (I-363) are officially live!