Over the past few years, AJHS Board Chairman and CJH Board Member Sid Lapidus has donated a total of 125 rare books and pamphlets to the Center for Jewish History. This wealth of historical material, which is housed in the David Berg Rare Book Room, largely focuses on the 18th and 19th century intersection of Jewish life and Enlightenment ideals, documenting the gradual expansion of religious liberty for Jews throughout Europe.

Today we are highlighting Benedetto Frizzi’s anonymously published 1784 treatise Difesa contro gli attacchi fatti alla nazione ebrea nel libro intitolato: Della influenza del ghetto nello stato (Defense Against the Attacks Made on the Hebrew Nation in the Book Entitled: On the Influence of the Ghetto on the State). Frizzi, aka Benzion Raphael Kohen, was a prominent Jewish Enlightenment physician, philosopher, and public intellectual in northern Italy and an outspoken defender of his people. In the Difesa, his first publication, Frizzi counters the earlier charges leveled by the Mantuan economist Count Giambattista Gherardo d’Arco in a 1782 work, Della influenza del ghetto nello stato, a copy of which can also be found in the Lapidus Collection.

This earlier polemic accuses the Jews of despising Christians and impoverishing their home countries through their economic activities. Frizzi’s defense describes the history of positive relations between Jews and non-Jews over the previous centuries, identifying several eminent Jews who have made major contributions in various fields of science, mathematics, and the arts. He goes on to explain the beneficial effects of the Jews’ economic role in Italy and throughout Europe and enumerates the important functions they fulfill as merchants.[i]

The Lapidus Collection includes two copies of the first edition of this rare work, enabling further insights into the history of the book as a physical object. One is untrimmed, resulting in uneven pages of varying size (below, left), and sewn on three cords into its original paper case binding (below, right). Prior to the mid-19th century, books were frequently sold either unbound, in gathered sheets, or in this type of simple binding, which was often temporary; the owner could bring it to a bookbinder who would then trim and bind it to order. Each time the book was rebound, the pages would be cut down to a uniform size.

The second copy is an example of a “quarter binding,” in which the spine is covered in a different material than the front and back covers (below, left), here featuring parchment around the spine and patterned paper over the boards, with evenly trimmed pages (below, center). Though it has been designed to mimic an older example, the unusually thick and spotless endpapers as well as the modern fabric endbands (below, right), which have been glued on rather than sewn, reveal the recent construction. The book also exhibits contemporary repairs of earlier tears and bug damage.

This newly bound copy features the bookplate of Ariel Toaff (born 1942), a somewhat controversial professor of Medieval and Renaissance History at Bar Ilan University in Israel, and son of a former Chief Rabbi of Rome, whose work focuses on the history of the Jews in Italy. Professor Toaff has been criticized for asserting a historical basis for the medieval blood libel, or the ritual use of human blood by Jews in their Passover rituals, in his 2007 book, later withdrawn, called Pasque di Sangue (Passovers of Blood). 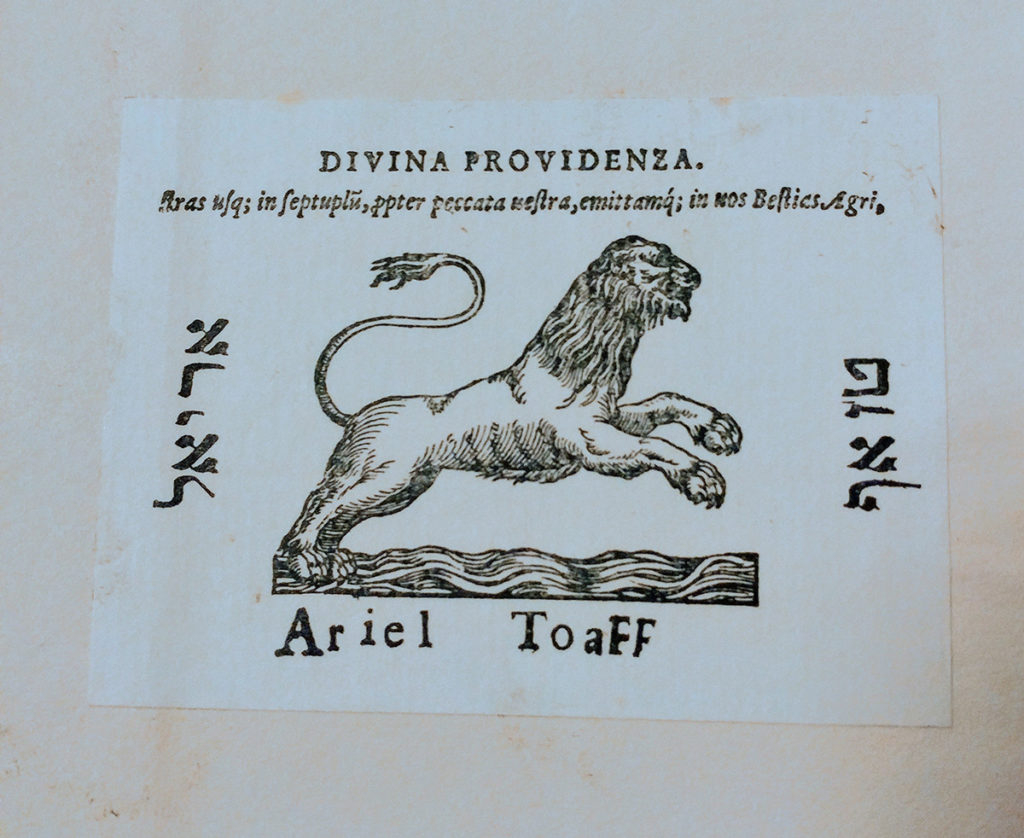 The Center for Jewish History is actively digitizing the Lapidus Collection in order to make these materials available to scholars and researchers around the world. A few examples of digitized items can be seen here:

An apology for the honorable nation of the Jews and all the sons of Israel. Edward Nicholas active 1648.

Anglia Judaica, or, The history and antiquities of the Jews in England. D’Blossiers Tovey. 1738.

Letters of certain Jews to Monsieur de Voltaire: containing an apology for their own people, and for the Old Testament. 1777.

Judisches Ceremonial This German book contains illustrated explanations to numerous Jewish rituals spanning from birth to death, including circumcision, presentation of the first born, prayer at the synagogue, a wedding procession, purification of the bride, the washing of the brother-in-law’s feet, the feast of reconciliation, death rites, burials, and celebrations of the Sabbath, Passover, and the New Year. Published in 1716, a copy of…