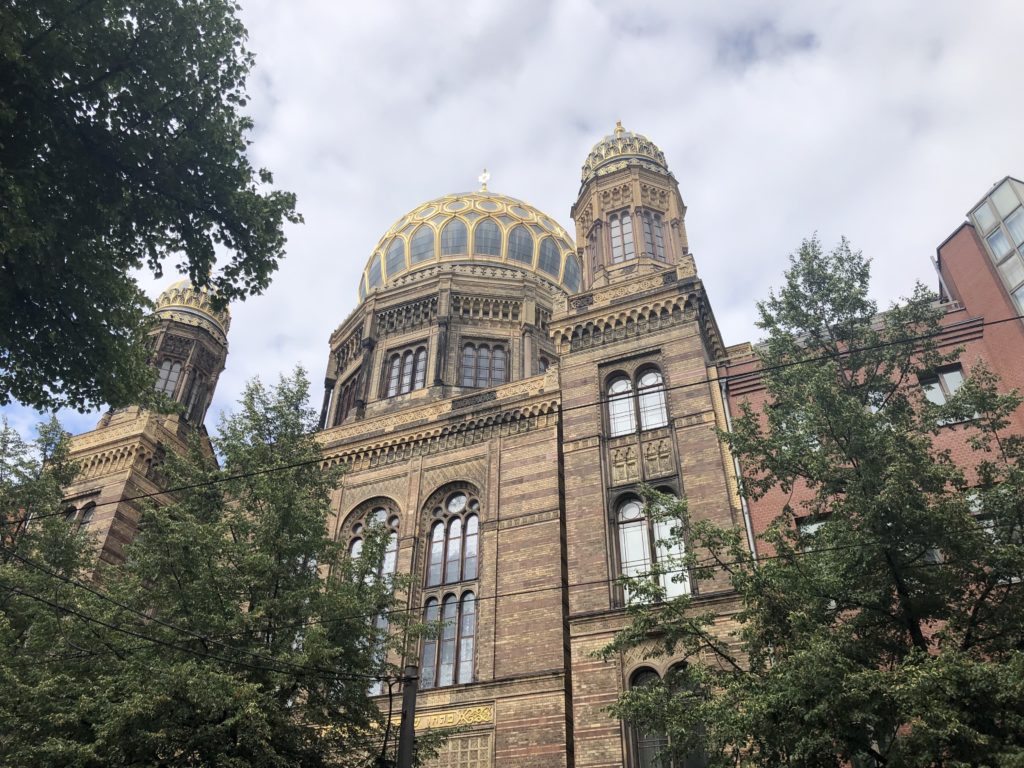 A short walk from some of the most well-known Berlin attractions is the Neue Synagoge (“New Synagogue”), a 19th century Moorish-style building on Oranienburger Straße. In 1859, the Neue Synagoge was built in order to serve the growing Berlin Jewish community, and became, at its completion in 1866, the largest synagogue in Germany at the time, seating 3,000 people. Now, the Neue Synagoge continues to hold services and hosts the Centrum Judaicum foundation, started in 1988 with a mission to “rebuild the New Synagogue in the Oranienburger Straße in Berlin for present and future generations and create a center for preserving and fostering Jewish culture.”

I visited the Neue Synagoge in July while spending time in Germany, developing my language skills and experiencing the city. After returning to New York from my time in Germany, I came back to the Center for Jewish History to continue my work as an intern. My visit to the Neue Synagoge left me wanting to learn more about its history, wondering what I could learn about the community.

The Neue Synagogue was partially destroyed during the November Pogrom, or “Kristallnacht,” in 1938, and further demolished by allied bombing in 1943. As a result, one of Berlin’s largest Jewish communities no longer had a place to gather and worship. The Centrum Judaicum was founded in order to rebuild and preserve. Parts of the synagogue that had survived were restored, in order to make sure that the Berlin Jewish community’s history was not forgotten.

Each week of my internship, I was able to devote some time to looking through the Center for Jewish History partner collections, exploring potential research projects and learning about what the archives have to offer. Spending time in the  archives allowed me to connect my lived experiences to the history they are a part of and I was excited to use the collections to find out more about the history of Berlin’s Jewish community. From that research, I wanted to share some beautiful images from the Leo Baeck Institute collections of the Neue Synagoge that I found in my time in the Lillian Goldman Reading Room.  These photographs, including one from my time there (seen above), and a postcard from the Centrum Judaicum itself (seen below), display the long history of the synagogue, and act as a means to process history visually.

If you are ever travelling to Berlin and looking for a lesser frequented historic site, the Neue Synagoge – Centrum Judaicum foundation is a must-visit that allows visitors to explore the rich history of Berlin’s Jewish community in the space where what was once Berlin’s largest Jewish community gathered and worshiped.

The Center for Jewish History invites people of all backgrounds to explore their roots at the landmark Ackman & Ziff Family Genealogy Institute. Participants will explore the world of family history research with the guidance of expert genealogists, become familiar with local and online resources, and learn how to present and share their family history. The series will provide an entry point for individuals…

The other day while procrastinating and scrolling through my Facebook feed, I came across two friends raising money for charities for their birthdays and three fellow students promoting the non-profits they’re interning at. In the day and age of social media campaigns, hashtags, and endless GoFundMe’s, giving has become a lot more personal. Jewish giving in America finds its roots in the landsmannschaften and…

by Sarah Ponichtera, Processing Archivist, Center for Jewish History The landsmanshaftn collections of the YIVO Institute for Jewish Research here at the Center illuminate the complex role of philanthropy in immigrant Jewish culture. Although the majority of the records concern apparently mundane affairs of collecting dues and reserving graves, buying Israel bonds and making dinner reservations for meetings, their constitutions reveal a wide array…