The other day while procrastinating and scrolling through my Facebook feed, I came across two friends raising money for charities for their birthdays and three fellow students promoting the non-profits they’re interning at. In the day and age of social media campaigns, hashtags, and endless GoFundMe’s, giving has become a lot more personal.

Jewish giving in America finds its roots in the landsmannschaften and Federations, especially those of the late nineteenth and early twentieth centuries. As immigration skyrocketed, “Federations were established by the Jewish social elite…to assure that the very foreign, indigent, East European immigrants…quickly and moved out of poverty, thus avoiding any embarrassment to their more established coreligionists.” (Cohen 41). In the mid twentieth century, many Federations focused on supporting Israel in the wake of the Second World War in addition to their local communities. 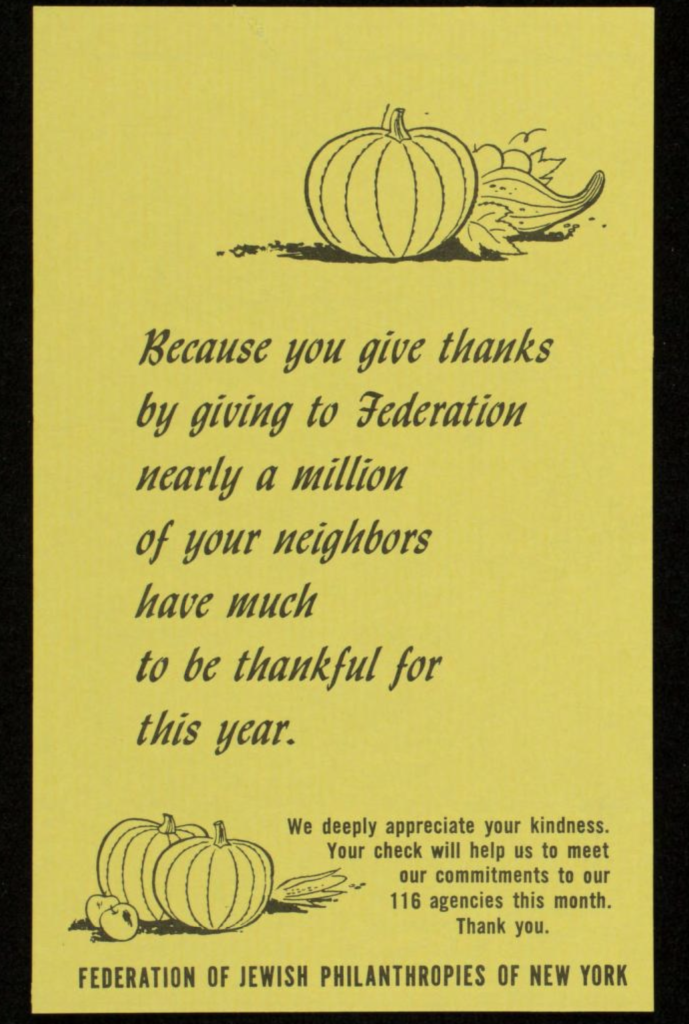 While some people choose to give to both local and non-local federations as well as general charities, the majority of Jews polled in the late 1900’s and early 2010’s heavily prioritized giving to Jewish organizations, especially local Federations. The Jewish community’s solidarity and ability to raise millions for their causes, both now and then,  has always been exceptionally impressive.

Nowadays, the need to help immigrants assimilate has dramatically decreased. However, the importance of supporting those in our locality is just as important. Federations still work to give back to the general public in much the same way, whether it’s caring for the elderly, the underprivileged, or fostering community.

As we recover from the Thanksgiving turkey, and #givingtuesday and the end of the tax year approaches, many are thinking about donating and who to donate to. We at the Center for Jewish History would ask you to remember us by donating today. As the foremost repository of Jewish history outside of Israel, we work each and every day to serve the Jewish community of America by preserving the stories and history of the same people that the landsmannschaften and Federations served. And nowhere do we better serve them than our local community here in New York City,  the first stop for many Jewish immigrants and the home to the largest Jewish population in the world.

Mind the Gap: Transition from Traditional to Contemporary

Not Just a Bundle of Letters

Finding yourself at odds in our new reality? Looking for a meaningful project to occupy your time and your mind? Genealogical research can help establish routines, provide a sense of control, and lower stress, key steps in maintaining your mental and physical health.You can check out some helpful tips and resources for getting started with online genealogy that we shared on our Facebook page, and organize your…

“Wall newspapers”—large, hand-lettered or typed newsletters posted in a shared communal space—have their roots in Soviet propaganda. Among the rich historical resources available through the Center for Jewish History’s digital collections are wall newspapers that form a portion of YIVO’s Displaced Persons Camps and Centers Poster Collection, RG 294.6. Created in the aftermath of World War II, these fragile documents provide a vivid glimpse…